In his address to the World Lithuanian Community Seimas, President Adamkus said that the objectives set many years ago – to preserve the Lithuanian identity of those living far away from Lithuania, to develop links with their homeland, the land of their parents and grandparents, to foster the Lithuanian community feeling and readiness to act in the common interest – had retained their significance.

Mr. Adamkus pointed out that the World Lithuanian Community was also facing new challenges which had to be accepted and dealt with because many Lithuanian had left their homeland in the past several years.

“The world Lithuanian community is an integral part of the Nation. You must know and understand that you are greatly needed by Lithuania which is concerned about all of you. Your history is our history. Lithuania of the world comprises a totality of cultural activities carried on by Lithuanians inside and outside Lithuania,” said Mr. Adamkus.

The president recalled a sad anniversary: the forced exile of Lithuanians to the East and West which started 65 years ago. Mr. Adamkus further said that historic memory could neither be lost or distorted.

“The issues faced by newly emerging Lithuanian communities should not overshadow the State’s primary concern over the fate of those born in exile and their descendants. We have to be creative in uniting our experience and innovations, traditions and modern advances ,” noted Mr. Adamkus.

The president pointed out that the World Lithuanian Community had emerged as a specific means of organizing the democratic and communal-lifestyle of foreign Lithuanians, while its organizational structure had become a priceless national heritage and a sound basis for future activities.

”The community feeling, which is the underlying basis for the activities carried on by the World Lithuanian Community, means the ability to admit that we need each other, that we seek to find common solutions, respect other points of view, support each other and live together in solidarity. Such a community feeling is mandatory for a healthy society and prerequisite for democratic prosperity,: said Valdas Adamkus. 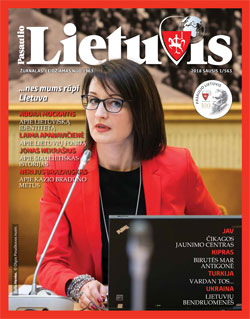